Glenn B. Knight, CIG
I am a Marine who is a retired Air Force master sergeant. Then I was Director of Development at Ephrata Community Hospital. I owned the Parkesburg Post, a Chester County newspaper. Then I was Director of University Relations at Penn State-Harrisburg before being named Executive Director of the Lancaster County Historical Society. A member of the Sons of Union Veterans of the Civil War, I am Past Department Commander for Pennsylvania. I wrote a weekly column for the Lititz Record-Express titled "On Second Thought." Some other activities of mine include webmastering web sites including my son Christopher Knight, a photojournalist with the Harrisburg Patriot-News. I also webmaster for the Rebecca Pratt Literary Group, a book agency, where I am Senior Editor. Since 2005 my wife Bev and I have lived in a 35-foot motorhome. We do own a small cabin, by a stream, on leased land on top of South Mountain near Gettysburg, PA. We spend our winters in Key West, FL where we are citizens of the Conch Republic. In the summer I work as a Park Ranger at Gettysburg National Military Park, PA, I am a Certified Interpretive Guide and a coach for National Park Rangers worldwide. 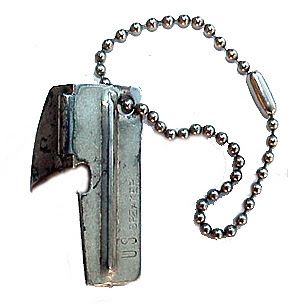 I had occasion recently to require the immediate use of a Philips screw driver. I later needed to scrape a sticker off a window. Then I ran into a situation in which a paint lid had to be pried up. A box had to have the tape sliced in order to open it and the clay mud on my shoes had to be scraped off. And then there was that can that had to be opened.

In each case I reached into my left pocket, extracted my key ring and applied my well-worn P-38 to the task at hand.

World War II aviators and aviation buffs will recall the P-38 as the “Lightning,” a versatile twin-tailed pursuit (thus the P) aircraft, but that is not what I carry on my key ring.

What I have with me always is another P-38 that can do almost anything—the universal tool. It was originally designed to open the aluminum cans that were boxed inside every C-ration issue. C-rats, as we called them, contained olive drab cans of various combinations of meats and vegetables (the very early models had paper labels which frequently tore off leaving a mystery-meal for the soldier in his foxhole—they eventually learned how to print directly on the can). Also included was an accessory pack containing chiclets, a small package of cigarettes, salt, pepper, sugar, eventually creamer and a napkin—you get points in combat for being neat.

Each case of Cs—another nickname—contained a pack of five P-38s which were doled out to the newbies, thrown out or hoarded by supply sergeants.

In the field my P-38 kept me well nourished with a wide range of high calorie food, including a chocolate disk wrapped in aluminum foil that was made by Wilbur-Suchard back in my home town of Lititz, Pa. The cigarette packs were part of a grand scheme to hook a couple of generations of Americans on smoking. Heck, at the end of every daily version of the Camel Caravan of News, John Cameron Swayse made an announcement that cases of Camel cigarettes were being delivered to a VA hospital for our veterans.

While I was in boot camp at Parris Island, SC in 1963 I was given a box of Cs and the cigarettes in the accessory pack were Lucky Strikes—in green packaging. At the beginning of World War II Lucky Strikes made a big announcement that Lucky Strikes green was going to war. Green paint was in short supply and the cigarettes began to sport a mostly white package for the war effort. That meant that my Cs were at least 20 years old.

Boot camp was where I got my first P-38 and I haven’t been without one since.
Posted by Glenn B. Knight, CIG at 8:40 AM